India is an intoxicating whirlwind of colour and culture. Covering almost 3.3 million square kilometres and with a population of over a billion, India is one of the world’s largest and most populous countries. It also boasts a vastly diverse landscape and countless different ethnicities. Combine India with the Maldives for a whirlwind honeymoon unlike no other. See our India & Maldives multi-centre honeymoon itinerary here.

Honeymoon packages within the borders of this captivating country can be virtually anything you want it to be. Keen to immerse yourselves in the vibrancy of a busy city there are so many great honeymoon destinations in India? Navigate the buzzing streets of New Delhi and learn about India’s history at the intriguing Red Fort. Meander the aromatic market stalls of charming Chandni Chowk and take a day trip out to nearby Agra to marvel at the majestic Taj Mahal.

Eager to explore the country’s northernmost realms? Dip into the mountain culture of India’s Himalaya region, scaling the peaks of Hemis National Park or paying homage to the Dalai Lama in his adopted home of Dharamsala. The Kalka Shimla Railway is a great way to see the sights of stunning Himachal Pradesh, while the wilds of Darjeeling offer the chance to sample freshly picked tea leaves at a handful of lush tea plantations.

If you prefer to take things slow then both Goa (in the east) and Kerala (in India’s south) offer luxury retreats with private pools, beautiful beaches fringed by coconut palms and glittering turquoise waters. Sample freshly made delicacies such as crispy kingfish and creamy prawn curry and relax to the sound of the waves as you sip a smooth lassi.

There’s a wealth of things to experience on your Indian honeymoon – so much so that your honeymoon here could easily be multi-centre. However you envisage your Indian escape, our honeymoon specialists are on hand to help personally tailor your trip.

When is the best time to visit India?

India is vast and its climate varies somewhat from region to region. It is generally accepted that the best time to visit is between October and March, when temperatures are more comfortable and the monsoon season has passed.

What is the time difference in India?

What is the currency in India?

Do I need a visa for India?

All British citizens require a visa for entry into India. If you have a full ‘British Citizen’ passport, you can purchase an e-Visa online prior to travelling. find out more on the official FCO website here.

What language is spoken in India?

Technically, there is no national language in India. Hindi and English are considered to be the two official ‘state-level’ languages, while the Eighth Schedule to the Constitution of India lists a total of 22 different official languages (including Bengali, Punjabi and Urdu). Overall, it is thought that there are 122 major languages in India (spoken by more than 10,000 people) and as many as a further 1599 minority languages.

How long does it take to fly to India?

A direct flight from London to New Delhi takes approximately 7 hours and 55 minutes.

The best time to visit India is between October and March, when temperatures are more comfortable and the monsoon season has passed. 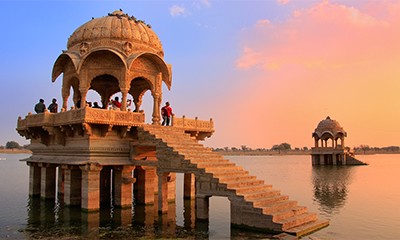